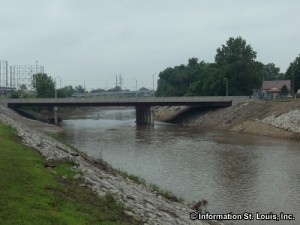 Some people call it a giant ditch. But, the River des Peres is actually a river that has been channelized and functions as a combined sanitary sewer and storm drain. It runs from Forest Park, where it has been contained in large underground pipes, it surfaces again and acts as the boundary between St. Louis County and St Louis City, and then flows into the Mississippi River. It was constructed in the 1930's as a preventative measure against flooding, after a series of floods in St Louis proved to be fatal. The River des Peres is on the the list of Historic Civil Engineering Landmarks.

Do you have a photo for River Des Peres in St Louis? Send it to us! Submit Your Photo